Terra is a drop down terminal emulator with support for multiple terminals in one window.

Terra is a Python / GTK3 drop-down terminal emulator similar to Guake or Yakuake, which shows up from the top of the screen when you press a keyboard shortcut, like the console used in games such as Quake.

The application combines some of the features available in Guake and Terminator, resulting in a nice drop-down terminal emulator in which you can use multiple terminals in the same window (you can split the screen horizontally or vertically): 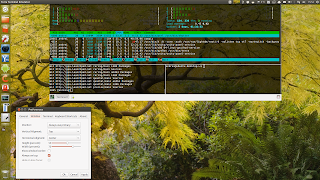 Compared to Guake, Terra also comes with some extra configuration options like:

Other features include initial multi-monitor support (available with the latest 0.1.5 release): you can select the monitor on which the terminal will show up, transparency support, configurable keyboard shortcuts to toggle the terminal visibility, split the terminal horizontally or vertically and more.

The application is still pretty new so expect new features to be added soon. You might also find some small bugs – for instance, in my test under Ubuntu 13.04, the “hide on lose focus” option is greyed out so it can’t be selected (I’ve already reported this bug). Report any bugs you may find @ Launchpad.

To get multiple terminals in the same window, right click Terra and select  “Split vertical” or “Split horizontal”. For now there’s no option to save / restore the terminals layout (like in Terminator), but such a feature will probably be added in a future release.

For other Linux distributions, you can grab the Terra Terminal Emulator source via Launchpad.

Let us know if you liked the post. That’s the only way we can improve.